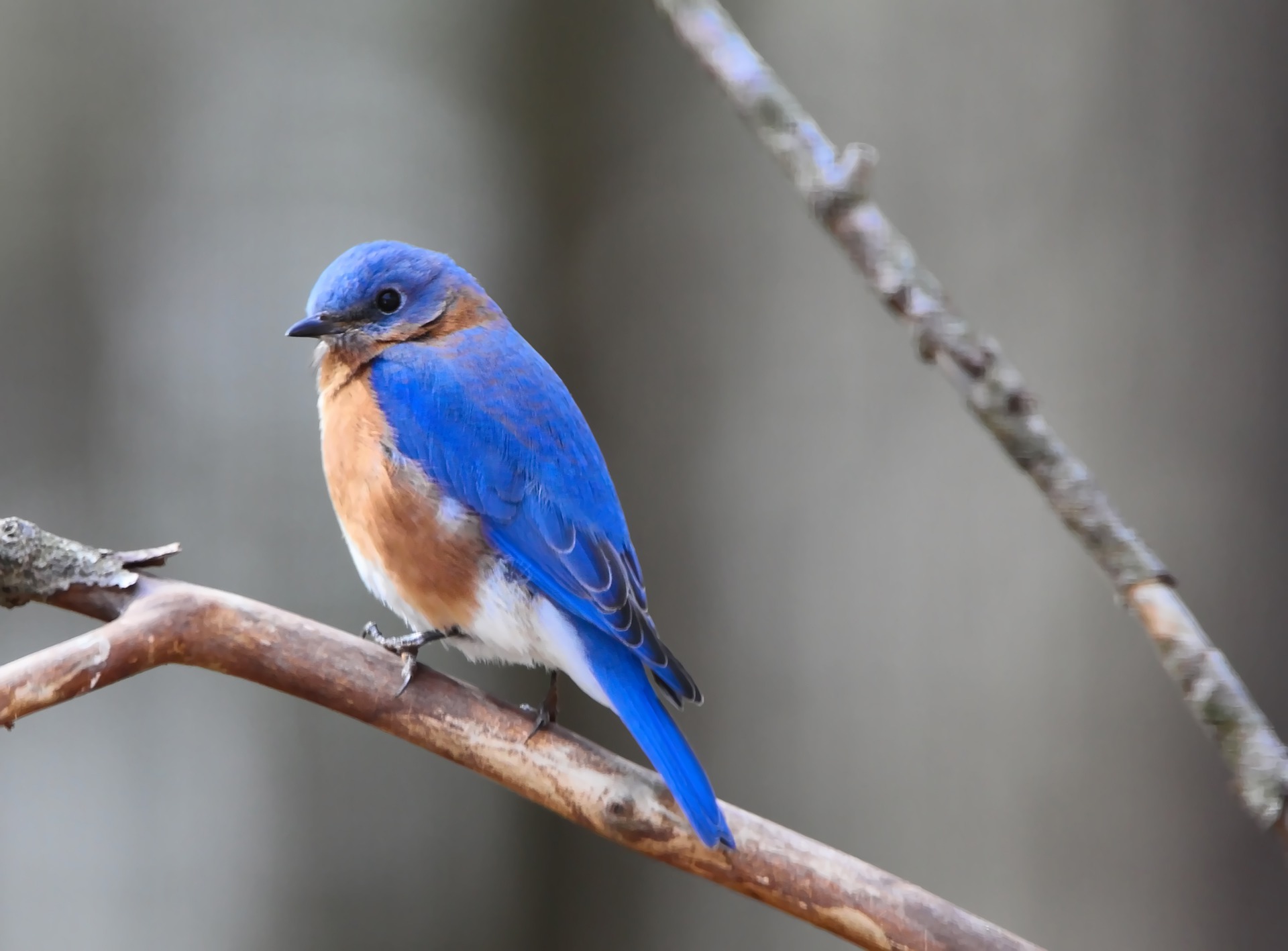 What do they look like?
Eastern Bluebirds are brightly colored, with a blue upper body, red breast, and white abdomen. Males have wing and tail feathers that are blue with black or gray shafts and tips. Their heads are a lighter shade of blue, which fades into a red throat and breast area. The breast and belly are white with light blue tips on some of the longer feathers. Females also exhibit this pattern of coloration, although they tend to be duller than males and have more gray. Eastern Bluebirds have short and slender beaks. Young bluebirds are grayish in color. They have speckled breasts and their wings are tipped in blue. The blue color becomes much more prominent and the speckles on their breast disappear as they become adults.

Where do they live?
Eastern Bluebirds can be found in many places all over North America (excluding the western U.S.). Some of the best places to find them are in open fields with scattered trees, orchards, or in clearings near water. Although you should be able to find them in any pasture, or on any fencepost, at any certain time. Eastern Bluebirds need trees as roosting and resting spots, and so that the young have a safe place to go after they fledge.

What do they eat?
Eastern Bluebirds eat a variety of foods depending on the season. In summer months Eastern Bluebirds consume mostly beetles, crickets, caterpillars, grasshoppers, and other insects. During the fall and winter seasons, when insects are less common, Eastern Bluebirds eat fruits and plants, including blackberries, honeysuckle, dogwood, red cedar, and wild grapes. Some good options to attract Eastern Bluebirds to your yard include nuggets, fruit and berry blends, and mealworm based foods.

Who are their predators?
Eastern chipmunk, flying squirrel, domestic cat, and other small predators.

How do they behave?
Eastern Bluebirds are very social, at times they will gather in flocks of 100 or more birds. These birds are partially migratory, leaving their northern homes when food sources become scarce or when temperatures and other environmental conditions are not suitable. When feeding, Eastern Bluebirds will often fly from their perch to the ground to catch an insect or other source of food. One of the most distinguishing characteristics of this species, aside from its distinctive coloring, is its song. Bluebird calls sound like “chir wi” or “chur lee”. When repeated several times, the call resembles the words “truly” and purity”. Eastern Bluebirds can fly at speeds up to 17 miles per hour.

What roles do they have in the ecosystem?
Eastern Bluebirds influence the composition of insect communities through their predation on insects.

How do they reproduce?
Females do most of the nesting building over about 10 days. Nests are cup-like structures lined with soft grass. Nests are constructed in trees within abandoned woodpecker holes or other cavities that provide adequate protection (usually several feet above ground). Each female lays 3 to 7 (on average 5) white or light-blue eggs. The female then incubates the eggs, which means that she sits on them to keep them warm until they hatch. The eggs hatch 13-16 days after being laid. Fledglings leave the nest 15 to 20 days after hatching. Several studies have shown that some young stay around the nest to help their parents care for a second clutch. The young are altricial, meaning they cannot care for themselves upon hatching. Both parents cooperate in raising the young, feeding them mainly insects.

How long do they live?
Eastern Bluebirds live from 6-10 years. The oldest known wild individual lived to 10 years and 5 months old.

How do they interact with us?
Eastern Bluebirds may help to control insect populations.

How Can I Attract Eastern Bluebirds?
Providing an enticing atmosphere is crucial to attracting Eastern Bluebirds to your yard. Make sure to have their preferred foods available (listed above). You can also provide birdhouses and feedersthat are specifically designed for bluebirds. Check out our Birding department for more products!