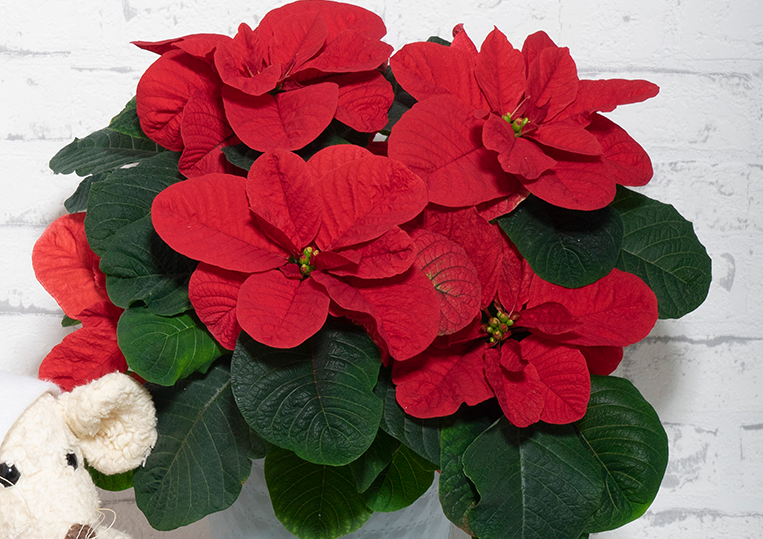 Who is peeping around the corner? It’s the Christmas Mouse!  She delights with her cute appearance and her big ears. Just like the Poinsettia novelty 2019: round instead of pointed leaves – no usual red Poinsettia but something very special for young and old. The robust variety with round bracts instead of pointed ones also convinced the expert jury of the novelty award of the IPM 2019 in the category flowering indoor plant. “A new shape, a new product, a new impetus for a bestseller of the German pot plants.” was the conclusion of the judges. The unusual soft-looking shape of its leaves reminds of the ears of a mouse. Inspired by the Christmas poem “The Christmas Mouse” by German storyteller James Krüss.

After World War II, Germany was a post- literary desert due to the Nazi Party discouraging creative writing - especially for children. Author James Kruss, was a hugely important figure in the re-establishment of the freedom of imaginative story-telling. His first children's book, The Lighthouse on Lobster Island (1956), was based on his own experience of growing up in Heligoland, and was followed by My Great-Grandfather and I (1959), a continuation in the same genre. He received many awards over his lifetime including the Hans Christian Andersen Award in 1968.

One of Kruss’s much beloved children’s poems includes the story of a “Christmas Mouse” who causes mischief every year around the holidays. So when a new round leaf poinsettia was developed in Germany, the name “Christmas Mouse” was a natural fit. The completely unique shape with vibrant red color, won the “Glazen Tulp Award 2020” in the category ‘Flowering houseplants’ at the international award ceremony on the evening of 16th January 2020 where the best market introductions in different categories were honored.

Esbenshades Garden Center is proud to introduce this new award winning variety as well as share the warm story of sentiment from a much beloved, though mischievous Christmas Mouse. May your holiday season be full of joy and blessings.

The Christmas mouse is strange -
even for the scholars.
Because once only all year round
you discover their tracks.

With traps and rat poison
you can't catch the mouse.
As far as this point is concerned, it is
Never went into the yarn.

This mouse makes all year round
no plague for people.
But suddenly out of the hole
she crawls on Christmas days.

For example, from the pastry,
the mother well hidden,
the best away at once
on Christmas morning.

Everyone said all out:
I didn't take it!
It was certainly the Christmas mouse,
who came overnight.

Another time even disappeared
Peter's marzipan;
Which was strange and amazing.
Because no one found it later.

The Christian shouted out:
I didn't take it!

It was certainly the Christmas mouse,
who came overnight!

A third time disappeared from the tree,
on which the balls hung,
a Santa Claus made of egg foam
along with other delicious things.

The Nelly said out and forth:
I didn't take anything!
It was certainly the Christmas mouse,
who came overnight!

And Ernst and Hans and Dad,
who shouted: what plague!
The evil mouse is back
and just on holidays!

Only mother did not speak a complaint.
She said unavailingly:
Once the sweets are gone,
the mouse has also disappeared!

Does anyone now say, at his house,
- for frenzy or lichens -
there would be no Christmas mouse,
then I doubt a little!

But I don't say anything that offends someone!
That could suit you!
What you think of Christmas mice,
is up to everyone.